Unlike the world-class terrain of near-by neighbor, Engelberg, this family-friendly Central Swiss ski area wins you over with charm, not championship downhills or death-defying off-piste descents.

Klewenalp-Stockütte ski area rises to 2001 meters (6565ft) from two base points via lakeside Beckenreid and mountainside Emmetten.  Wonderful views of the Vierwaldstättersee region and quality snow conditions from December through April add to the appeal of this small ski area.

The lift-accessed terrain won`t blow you away, nor will the mountain restaurants or accommodations provide the 5-star offerings you`ll find at more glamorous ski resorts. But you`ll leave happy with a full belly, a full-faced cheek-to-cheek smile and a face full of snow if you know where to ride.

There are some excellent backcountry ski touring and split-boarding options accessible from the top lift station, Chälen, potentially providing descents upwards of 2000 vertical meters (6500 feet) from peak-tops to near the shores of the Lake Luzern below. These are challenging non-glacial backcountry zones that require guidance to safely reap the rewards offered by this stretch of peaks topping out below 2500 meters, from Neiderbauen Chulm above Emmetten in the West, across Schwalmis & Risetenstock above Beckenreid, over to Brisen in the East.

In terms of big, lift accessible off-piste/sidecountry lines without the need for hiking, you should look elsewhere.

Klewenalp has some fun off-piste opportunities scattered beneath chairlifts and out along a couple of traverses originating at the top of the Chälenegg 4-seater, but overall, Klewenalp-Stockhütte off-piste lacks enough consistent pitch to merit legendary status.

If you`re willing to sacrifice the steepness of places like Andermatt or Engelberg, the off-piste zones of this calm little ski area above Lake Lucerne will still put a smile on your face.

The pistes at Klewenalp-Stockhütte are mainly suitable for beginner/intermediate skiers, as even the red and black runs are pretty mellow.

Advanced: The red piste to skier-right off the Chälenegg is a lot of fun and allows you to gain quite a bit of speed from the top. It flattens out rather quickly, which is a defining characteristic of the terrain at Klewenalp-Stockhütte, but it rolls & twists in such a fashion that`ll keep you occupied cycling the lift for a while. Make sure to soak in the views from the top of the Chälenegg…it definitely reminds you of the beauty of this little ski hill and the region as a whole.

The red run descending to riders-left from atop the Klewenstock , accessible via the Sesselbahn Klewenstock, offers the steepest pisted pitch at Klewenalp. Similar to the piste descending from the Chälenegg, this run will flatten-out a bit before regaining its steepness wrapping back to the left toward the bottom of the lift. Otherwise, there isn`t much else that`ll keep you satisfied except for the T-bar (drag-lift) off to the far skier left of the resort (Skilift Errglen), but this is definitely more akin to intermediate terrain. *FYI: The views from atop the Klewenstock (1748meters) provide a great vantage point to enjoy the surroundings.

Intermediate: Mid-level skiers-snowboarders will really appreciate the pistes at Klewenalp-Stockhütte. There isn`t one spot on the mountain that is overwhelming in terms of steepness or verticality, except possibly the red run from the top of of the Klewenstock if it`s icy, making for an enjoyable time across the entire groomed ski area.

Beginner: This is another strong point for Klewenalp-Stockhütte. There is a relatively large, wide, easily accessible beginners area not far from the main cable car top station originating in Beckenreid (450m-1600m), with a couple of drag-lifts. Likewise, there`s a beginner section with two drag-lifts to left of the Skilift Horti and Gondelbahn Emmetten-Stockhütte, originating in Emmetten. 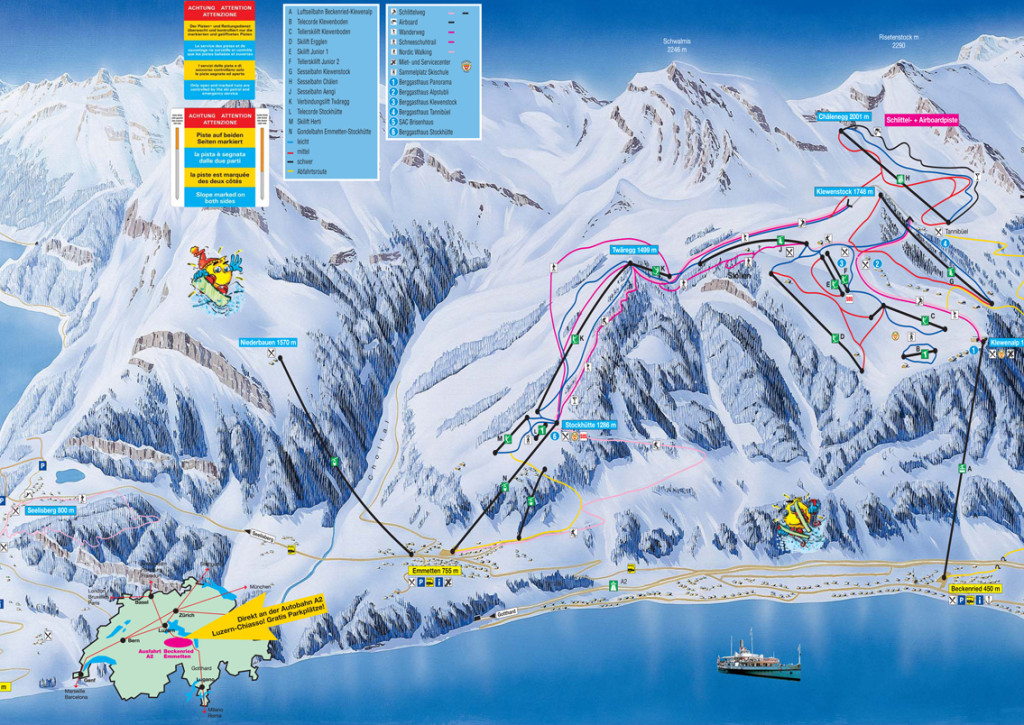 There are a lot of things we like about Klewenalp-Stockhütte, one of them being there isn`t really a terrain park. We love jibbers, pipe riders and slopestylers, but there`s a time and a place for everything. Klewenalp isn`t the place and hopefully they won`t make the time to upgrade the few tiny features set off to riders-right of the upper portion of the Skilift Errglen.

It`s quiet at Klewenalp…no need to break the silence with break-beats blaring in the background.

There are 13 lifts at Klewenalp-Stockhütte, none-of-which are exceptionally new or fast. Likewise, the total journey time from the Luftseilbahn Beckenreid-Klewenalp or Gondelbahn Emmetten-Stockhütte to the highest lift accessed point of the ski area atop the Chälenegg detachable 4-seater isn`t direct or extremely efficient.

However, the lifts aren`t agonizingly slow and lend to the laid back, relaxed atmosphere, allowing you to soak in the unfettered surroundings.

TRAIN: There is no train access to Klewenalp-Stockhütte. You will need to take the train from Luzern to Stans (20 min.), then hop on a bus from Stans bahnhof to Beckenreid dorfplatz (15min.).

CAR:  Either Klewenalp or Stockhütte are accessed from the A2 motorway coming from the North or South.

To reach the Luftseilbahn Beckenreid-Klewenalp, exit at Buochs-Beckenreid, follow the lakeside road for 5 minutes directly into Beckenreid, spot the small sign indicating the cable car in the middle of the dorfplatz (village center) then find a parking place next to the luftseilbahn.

To access Emmetten and the Stockhütte side directly, exit the A2 motorway, ascend the mountain road from 450 meters to 755 meters, then you`ll see the Gondelbahn Emmetten-Stockhütte on the right side of the road.

*Little Klewenalp is a marvelous family-friendly option in the region but don`t let down your guard if you plan to play off-piste. Although the terrain is decidedly more mellow than bigger glacial Zentralschweiz ski areas, proper backcountry training and equipment is a necessity if you want to ride off-piste safely. There are numerous hidden danger spots scattered around innocuous sections of off-piste terrain with fence posts, jagged tree stumps and barbed wire fencing to look out for.

*Don`t be fooled by the less than helpful trail map indicating the off-piste valley run from top to bottom. The ski map would lead you to believe it`s a relatively obvious descent path, however, this is inaccurate. Chances are you`d find your way down eventually by sticking to the mountain road winding its way toward the valley, but unless you want your “full day” of riding to include only 1 painfully long descent coupled with hours of walking, find a local to lead you down.

If you thought those little throat lozenges heralded by alpenhorns on TV commercials were produced with a bunch of nasty chemical-compounds with unpronounceable names, you`d be mistaken. In fact, lovely little Klewenalp is home to one of the herb gardens Ricola uses to produce their herbal medicinal throat candies.

There`s also another “garden” of sorts just outside the top station of the Luftseilbahn Beckenreid-Klewenalp. Instead of plants, there`s a grouping of cuddly little marmots living in an open-air enclosed rock garden. They`re still a bit skiddish when it comes to comfortably basking in the sun with a bunch of strange looking, goggle-eyed weirdos pointing and staring in delight, but the kids will love it.