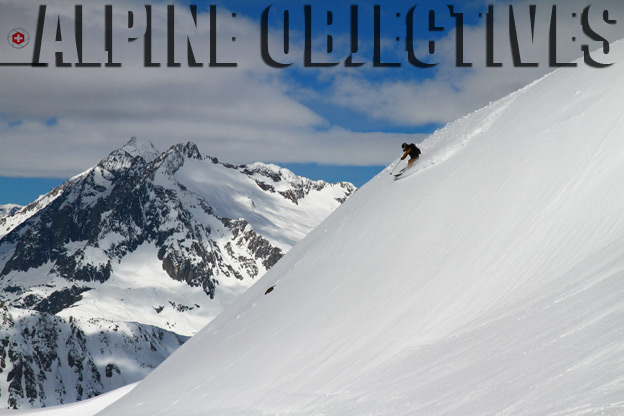 Before word of its life-affirming off-piste terrain began seeping into the airwaves of powder junkies around the world, the little mountain town of Andermatt, positioned at the junction of four major mountain passes — Oberalp, Furka, St. Gotthard & Goeschenertal — served as a connector for northern & southern Switzerland long before the notion of the Swiss Federation or likely even skiing existed.

Only recently has Andermatt begun to exert its reputation as a world-class snowsports destination that`s a must-do trip for every off-piste & backcountry snow junkie.

This photo was captured below the Gemsstock`s summit (2963m/9721ft) on the flank of the Gurschen Glacier. The mountain peak in the background sits at the head of the valley leading toward Oberalp Pass connecting the three ski areas of the Gotthard-Oberalp Ski Arena – Andermatt, Naetshcen & Sedrun.

Following a 25 minute train ride from Andermatt past Nätschen, skiers & snowboarders are deposited literally in the middle of Oberalp Pass (2044m/6706ft) near a ski-lift accessing Sedrun on the opposite side of the Val-Val.