Early season riding at Breuil-Cervinia often resembles mid-season skiing & snowboarding at a lot of other places around the world. When you want freshies in October or November at a European ski area (or excellent skiing & snowboarding throughout the entire winter), head to the continent`s highest lifted point in Italy`s, Aosta Valley.

Cervinia Skiing & Snowboarding: Snowfall on the Italian side of an icon

During full winter operations, the giant Breuil-Cervinia Valtournenche Zermatt ski arena delivers an unworldy 360km (224 mi) of pistes, lift-access up to 3899m (12,792ft), fantastic snow totals and diverse appeal for winter tourists off the slopes. Interconnected Zermatt, Switzerland gets all the accolades, but sharing a picturesque Matterhorn (Cervino) backdrop is just one reason every powder-lover should add Cervinia to their list of top European skiing & snowboardng destinations.

The Italian side of the ski domain — reaching an impressive 3883m/12,740ft — quietly enjoys the same benefits of high-elevation, consistently deep snowpacks, long pistes and well-developed infrastructure as its famous Swiss neighbor. But quiet isn`t necessarily the word to describe Breuil-Cervinia Valtournenche. As Europe`s first purpose built ski area, winter tourism has been a big part of the area`s identity since the early 1930s. Its notoriety goes back even further as it`s been a premier mountaineering hot-spot for nearly two centuries (can you say Matterhorn?).

But there`s generally more elbow room mid-week on-piste and less off-piste fervor than on the Swiss side, giving it a more relaxed vibe.

Cervinia never waits to open too far into November (often mid-October) and consistently provides access to a large percentage of its total 160km of trails even at early stages of the winter. The groomed terrain is predominately geared to beginners and intermediates, but advanced skiers & snowboarders will appreciate the long, cruisy pistes and easy-access off-piste zones spread across the entire ski area. 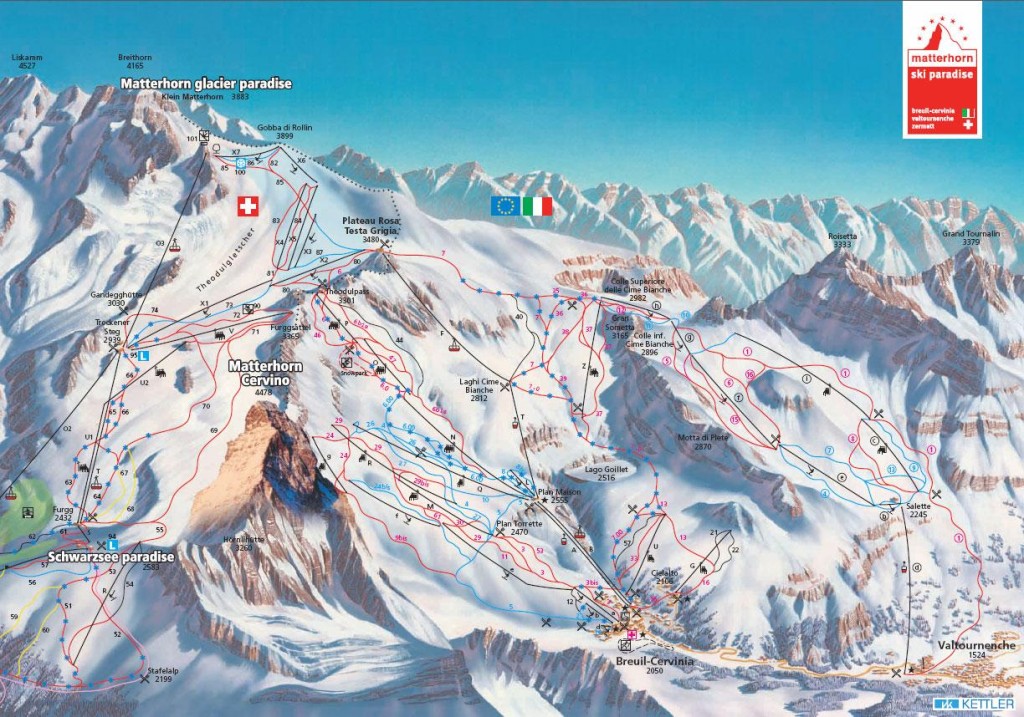 Even before most people dig their skis/boards out of storage for the first pre-season waxing, Cervinia opens up tons of groomed terrain stretching from one side of the ski area to the other. It`s likely that the pistes above Valtournenche (via the Salette cable car) won`t be operational quite as soon as areas above Breuil-Cervinia, especially mid-week early season. But there is a very good chance — even late October — that one of Europe`s longest pistes,Ventina, starting from atop the Plateau Rosa (3480m/11,417ft) via the Cime Bianche Laghi cable car, will be available for top-to-bottom descents. The trail snakes, twists, rolls, flattens, steepens and drops for nearly 1500 vertical meters/4920vft, until reaching its terminus in Breuil-Cervinia village at the base of the Plan Maison cable car station. All in all, the trail delivers one of the longest groomed runs in the European Alps totaling a thigh-burning 11km.

Early season off-piste riding requires caution, patience and the realization that faceshots will probably need to wait for a couple of months. But patience and caution aside, goggle-caked faceshots could be in the cards at Cervinia pre-December prior to most ski area openings around the world. It`s not uncommon for Cervinia`s snowpack to reach upwards of 150cm at higher elevations in early November, providing access to incredible amounts of ungroomed, generally safe, easily reachable terrain. Most off-piste riding will traditionally be “confined” to three areas, although much of the ski area`s high-season off-piste is up for grabs albeit in somewhat smaller doses.

The first zone, vertically between the Plateau Rosa and Plan Maison top station below the Cime Bianche Laghi cable car, offers great, wide open pow fields that roll off the top and steeply drop mid-way down. Be careful to spot your lines on the cable car ride up so as to avoid extremely large cliff-bands visible from the cable car front window.

The second off-piste area above Lago Goillet is accessed via 3-seat chair-lift and offers steep, easy access off-piste directly under the lift or by traversing riders-left from the top of the chair.

The final off-piste zone normally available early season is a section of the ski resort to far rider-right of the domain. You`ll find generally mellow, flattish off-piste just alongside the trails, making for some fun, safe action even for inexperienced off-pisters

The lift-accessed goodies dropping toward Valtournenche (far riders-left) aren`t always available upon early season opening, but advanced riders with goals of terminating their off-piste tours in Valtournenche (not Breuil-Cervinia) can potentially give it a go with caution & local guidance.

Car/Bus: Getting to Cervinia by car is your best option. Private and shared transfers from major international airports in Geneva, Milan and Turin are also very convenient and offer auto-less visitors less stressful access to the ski area with travel times between 1.5 to 2.5 hours.

Train: The nearest train station to Breuil-Cervinia is Chatillon/Saint Vincent, located at the start of the mountain road leading to the ski area base 1500 vertical meters above. Buses run regularly with journey time minimum 40 minutes. A better train option is to access the ski resort from the Swiss side via Zermatt. Keep in mind Zermatt is refreshingly car-free, requiring a short 12 minute train ride from Täsch or (for most train-bound visitors) from the main junction point at the head of the valley leading to the ski area in Visp (55 minutes).

Although not nearly as prevalent in Europe as in North America, heli-skiing is offered in select places of the Alps. Heliski Cervinia offers exhilerating backcountry powder adventures, primarily strattling the ridgeline between Switzerland and Italy, ultimately up to Europe`s second highest peak, Monte Rosa (4634m/15,203ft). Excellent snow totals, impressive glacial scenery and untouched off-piste descents of 16km make a heli experience an unforgettable addition to an Aosta Valley excursion at Cervinia.

Driving is the only feasible way to reach Cervinia from the Italian side. This means if you`re not a skilled winter driver and accustomed to the aggressive Italian driving style, you might want a professional shuttle/taxi service to get you to the ski resort. The road from the valley into Breuil-Cervinia is long, steep, twisty and often very stressful because of impatient drivers willing to pass you on blind, icy corners. On the best road condition days, the journey from the valley takes more than 35 minutes by car and easily 1-hour or more in snowy, high-traffic conditions. If you decide to drive, be very alert and keep your road rage to a minimum. Believe it, there will be plenty of road rage from Italian drivers to go around. Sorry to say, sometimes cliches are true. The one about Italians driving aggressively — even on dangerous wintry mountain roads — is a prime example.

Cervinia offers-up some of the world`s best, easy access, early season off-piste options. But easy access doesn`t mean “easy,”, nor does it mean safe. Be smart off the trail at Cervinia and everywhere else. Prepare yourself with proper backcountry safety gear and essentials.